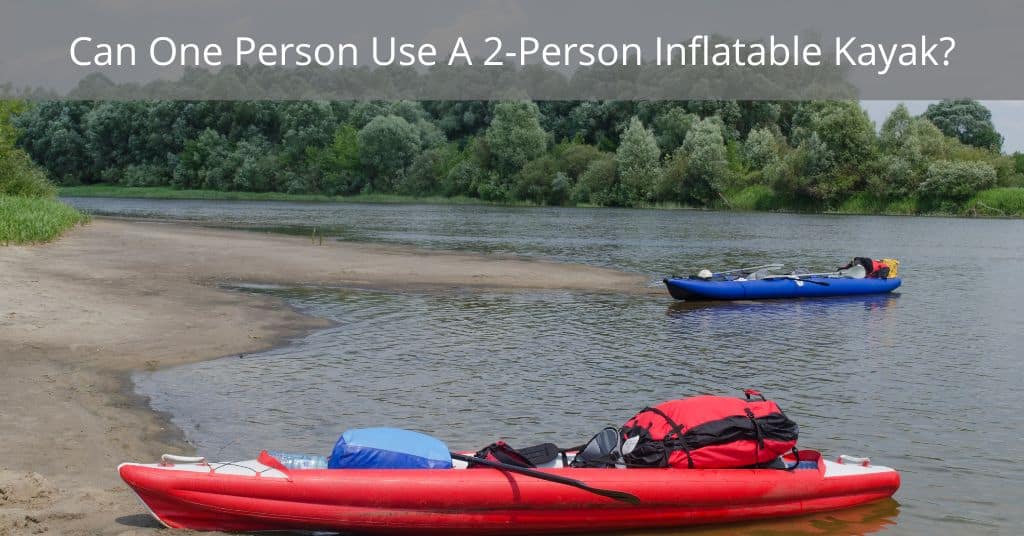 So you want to know, “Can one person use a 2-person inflatable kayak?”

Inflatable kayaks are a great option for kayakers of all levels.

They’re easy to transport and store and can be an excellent option for solo or tandem paddling.

But what if you only want to use a two-person inflatable kayak yourself?

Can one person use a two-person kayak?

Can One Person Use A 2-Person Inflatable Kayak?

Absolutely! One person can paddle most two-person inflatable kayaks. The beauty of paddling a two-person kayak solo is that there is much more room for gear and other supplies. Plus, If you take your dog with you, there is plenty of room to paddle with your pooch.

Setting up a two-person inflatable kayak to paddle alone is easy if you have the right kayak.

Typically it’s as easy as moving the back kayak seat forward, and you are good to go.

While these kayaks are typically designed for two people, they can also be paddled by one person.

There are several benefits to paddling a two-person kayak alone, including extra legroom, storage for activities like kayak camping, and paddling with your dog.

Extra legroom is one of the main benefits of paddling a two-person kayak solo. Since you don’t have another person occupying the kayak, you’ll have plenty of room to stretch your legs.

This is especially beneficial if you’re taking a longer trip or tend to get cramped when kayaking. In addition to extra legroom, another benefit of solo paddling is that you’ll have more storage space.

This is ideal for activities like kayak camping, where you need to bring additional gear. Finally, solo paddling also allows you to bring along your dog.

If you’re an avid kayaker, you know how difficult it can be to find a big enough boat to accommodate your furry friend.

However, you’ll have no problem taking your dog along for the ride with a two-person kayak.

Cons Of Paddling A 2-Person Inflatable Kayak By Yourself

Paddling a two-person inflatable kayak by yourself also has a few disadvantages. Perhaps the most obvious is that it’s slower than paddling with another person. You have less paddling power.

In addition, the weight distribution can be challenging, making the kayak more difficult to maneuver.

Granted, the paddler sits toward the middle of the kayak, but the weight of other gear can still be slightly off-center.

Keeping the kayak straight can be more difficult if you’re paddling solo in windy conditions. However, these challenges are relatively minor and can be easily overcome with practice.

Finally, two-person inflatable kayaks are typically heavier than solo kayaks, making them more difficult to transport for one person.

If you’re looking for a two-person inflatable kayak that you can paddle solo, the Sea Eagle 380x is an excellent choice.

It’s easy to inflate with an electric pump, has a skeg for tracking, and has plenty of room for all your gear.

The 380x is versatile. It’s a tremendous all-around kayak for flat water and rated up to Class IV whitewater.

A set of D-rings sets the seat position to paddle the kayak solo. As a result, the kayak has plenty of room behind the seat for gear and a lot of legroom.

The SE 380x is very stable, so much so that you can stand up and paddle if you trust your balance.

So whether you’re paddling solo or with a partner, the Sea Eagle 380x will give you a great experience out on the water.

Honestly, two-person inflatable kayaks can be pretty cramped for two people. It’s kind of like the ratings on a tent. Getting four “regular-sized” people into a 4-person tent is difficult.

Depending on the size of the people, sometimes squeezing two people into a kayak is hard. It’s also tough to paddle in sync with another person.

One more thing. If you paddle a tandem kayak with another person, you better enjoy their company. No matter how fast you paddle, you can’t get away :).

So, can one person use a 2 person inflatable kayak? The answer is a resounding YES!

Paddling a two-person inflatable kayak by yourself has several benefits, including extra legroom, storage space, and the ability to bring your dog along for the ride.

However, there are also a few disadvantages, such as slower paddling speed and more difficulty maneuvering in windy conditions.