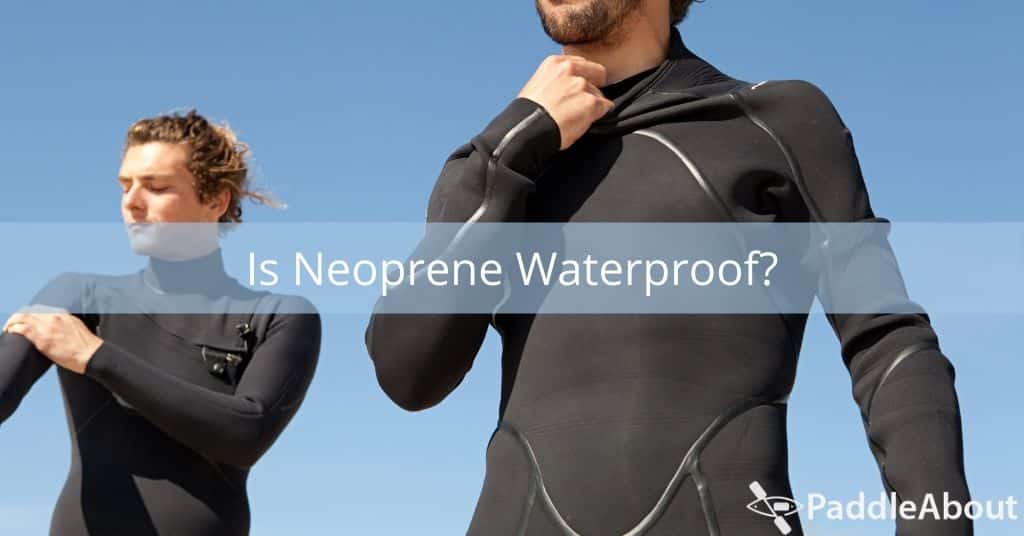 If you are a watersports enthusiast, you’ve likely come across clothing and gear that is made from neoprene. The versatility of this material is what makes it so popular among kayakers. On top of helping you to stay warm, clothing made from neoprene is flexible enough to allow you to enjoy the freedom of movement as you paddle or surf.

This material almost seems so magical that you can’t help but wonder about how it’s made and what other uses it has. But the question remains is neoprene waterproof? Let’s take a closer look and see what makes this material perfect for wetsuits and other watersports gear.

Neoprene is a synthetic rubber that is also sometimes referred to as polychloroprene. It was first created in 1930 by scientists working for Dupont and looking for an alternative to natural rubber, which was in high demand.

Today, the rubber is used in everything from gasoline hoses to orthopedic braces, and you’ll find that kayakers tend to have at least one type of clothing or gear made from this flexible material.

Neoprene is a polymer. Polymers are large molecules that are made up of repeating structural units. The process of polymerization involves creating a chemical reaction that causes monomers to react and bond together.

For neoprene, this involves using potassium persulfate to generate a chemical reaction within the monomer chloroprene.

Once the chemical reaction is complete, polychloroprene chips are left behind. These chips are then melted and mixed with carbon pigments and foaming agents to create the expandable material you recognize as neoprene.

Finally, the mixture is baked, which creates sheets of the material that can then be turned into products such as wetsuits and boots.

Neoprene can be made with either closed or open cells, and the type of cells it is made with determines whether or not it is waterproof. The closed-cell form is manufactured using nitrogen gas.

This causes it to be waterproof and more buoyant than the open cell form. Although the open-cell form is not waterproof, it comes with the added benefit of having more breathability.

The majority of gear you find for aquatic activities is made from the closed cell form of neoprene since water resistance is typically desirable. Wetsuits and other gear are further waterproofed by special manufacturing techniques that include using blind stitching and special glue along the seams.

While a wetsuit is mostly water-resistant, you should know that most types allow for a small amount of water to penetrate the material. This creates an insulating layer of water between your skin and the neoprene that helps you to stay warm.

If your goal is not to get wet, such as kayaking in cold water, you might prefer a dry suit. These also tend to be made from neoprene, but a dry suit may have other materials mixed in to further increase the water resistance. With a well-sealed dry suit, you should not have water penetrate the material and sit against your skin.

What Is Neoprene Used For?

Neoprene has several desirable qualities that make it helpful in creating a variety of products. The material lasts longer than rubber, which is why it tends to be used for things such as gaskets and hoses that are exposed to high temperatures and other elements that increase the chances of wear and tear.

Neoprene is also resistant to burning. You can find it used for weatherstripping around fireproof doors and in gear such as gloves that someone might use when working with hot materials.

You likely already use neoprene in some form right now. Its cushioning and insulating qualities make it perfect for using to create laptop sleeves and can coolers. Mousepads and lunch bags are a few more household products that are made from neoprene.

In vehicles, neoprene is often used for seat covers. Since it is water-resistant, neoprene seats are ideal for keeping the interior of a vehicle dry when you have kids or people who engage in watersports riding inside.

How Is Neoprene Made?

Two main methods are used to make neoprene. The first method is oil-based and uses butadiene, which is made from petroleum. The second way that neoprene is made is called the limestone method. It uses acetylene that comes from calcium carbonate.

The limestone method is often viewed as being preferable to the oil-based method because it is more eco-friendly. Using acetylene also results in neoprene that has a higher density closed cell structure. This increases positive qualities such as heat retention, durability, and waterproofing compared to neoprene made with an oil base.

Neoprene can float, but the different manufacturing processes can influence how buoyant a specific product is when placed in the water. Limestone neoprene is made with added nitrogen that fills the closed cells and prevents them from absorbing water.

Oil-based neoprene has a lower level of cell penetration, which means that water is more likely to soak into the cells. Once enough water soaks into the cells, then the neoprene product can sink.

How Long Does Neoprene Last?

On average, neoprene has a shelf life that ranges from five to 10 years. For the most part, the shelf life of neoprene is affected by its storage conditions and the level of use that a product receives.

For instance, you could expect that a wetsuit that you wear several days a week through the summer might not last as long as one that you only use once or twice a year.

Neoprene products should also be stored in a dry, cool place that protects them from excessive heat, moisture, and chemicals. For a wetsuit, you’ll want to make sure that it is completely dry before you put it into storage.

Is Neoprene Safe to Wear?

Neoprene is generally safe for people to wear. The majority of risks with neoprene happen during the manufacturing process when a person could be exposed to chemicals. People who help produce neoprene tend to use safety precautions such as wearing protective gear to prevent health issues.

Once the material is made, it is considered to be chemically stable. This means that you should not experience long-term health issues from any of the components used to make a product.

However, you should know that some people experience skin sensitivities after wearing neoprene clothing or gear. This typically presents as dermatitis. You might notice that you have a slight rash, redness or skin swelling in the areas that come in contact with neoprene if you have sensitive skin.

This reaction is caused by a mixture of chemicals called dialkyl thioureas that the American Contact Dermatitis Society declared to be the allergen of the year in 2009 [1]. Keep in mind that not everyone experiences dermatitis from wearing neoprene.

You can avoid having an adverse skin reaction by only wearing your gear for as long as you need during your aquatic activities. After you take your neoprene clothing off, you can further prevent issues by rinsing your skin with water.

Most rashes associated with neoprene are short-lived, and they should respond to your usual self-care methods.

Many people who engage in watersports prefer to wear neoprene boots for comfort and safety purposes. When you’ve been curious about whether neoprene is safe to wear, it is interesting to note that choosing to wear boots made from this material can prevent serious issues such as frostbite and falls along a slippery shoreline.

Neoprene boots add a layer of insulation that is desirable when you are kayaking in cold water. You can find boots that come in varying lengths, which allows you to choose whether or not you prefer them to cover your calves or just your ankles.

Wearing neoprene boots can protect your skin from being cut up by debris you come across in the water, and you can choose ones with traction to help you have more stability when you are walking on land.

When it comes to wetsuits, you just can’t go wrong with neoprene. Wetsuits provide insulation that can help you maintain your body temperature when you are swimming or kayaking in cooler waters.

You can find wetsuits in varying levels of thickness that allow you to choose how warm you want them to keep you, depending upon the air and water temperature outside.

Wetsuits also come in different styles. In cold climates, you might want to wear a full-body wetsuit that limits how much of your skin is exposed to the water. In warmer climates, you can choose wetsuits with short sleeves and legs that allow you to have more freedom of movement.

Although neoprene wetsuits are flexible, some people also prefer to wear an underlayer made from fabrics that prevent chafing, such as a nylon swimsuit.

How Do You Clean Neoprene?

Neoprene is durable, but it does require a gentle approach to cleaning. You’ll want to avoid putting your neoprene clothing into a washer or dryer. Instead, you can wash it by hand using a gentle detergent. For best results, choose a detergent that is meant for use on neoprene.

The detergent should be mixed with water before applying it to the neoprene, and you’ll want to rinse out your gear for as long as it takes to get the detergent entirely out of the fabric.

Once you’ve rinsed your wetsuit or boots, let them air dry. As you do, make sure to keep them out of direct sunlight to further protect the fabric.

Neoprene is waterproof, but its benefits for use in watersports go far beyond just keeping you dry. Most avid watersports enthusiasts prefer to have wetsuits and boots on hand to keep them warm as they paddle or surf.

You can also enjoy knowing that your favorite gear can last for years with proper care. Once your wetsuit or other types of gear reaches the end of its life span, it can be recycled to get even more use out of this amazingly durable material.