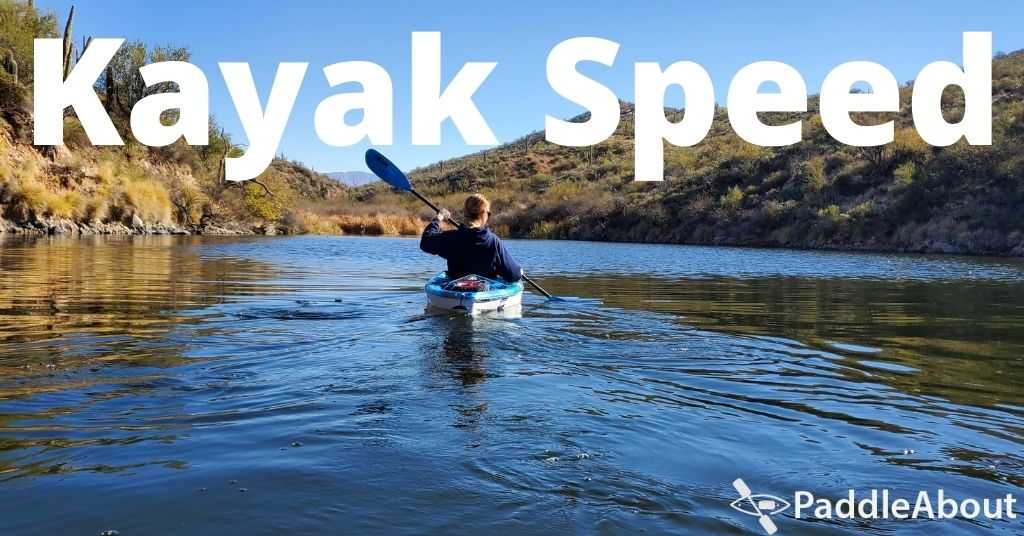 Kayaking is an excellent way to clear your head and explore the great outdoors. But, when you plan a trip around your favorite waterway, you might be wondering how long it will take you to paddle from point A to point B. This article focuses on kayak speed and the factors that play a role in how fast your kayak can go.

Many people ask, “how long does it take to kayak a mile?”  That seems like a reasonable question, and one mile is a good point of reference.  Many factors affect kayak speed, including the water and weather conditions to name a few.

Understanding kayak speed is important for many reasons. It’s good to know how fast you can get to your destination, and more importantly, how long it will take you to get back to your launch point at the end of the day.

Kayaking is also an excellent way to get some exercise.  A paddler can work various muscle groups and elevate their heart rate depending fast they propel the kayak.

Experience can play a factor in kayak speed as well.  Some folks are more efficient paddlers than others because they have a lot of experience.

One thing to note, this article is designed to be general in nature, useful for casual or recreational paddlers. There are a lot of variables when it comes to kayak speed.

With that said, let’s get to it.

How fast does a kayak go?

There are a couple of assumptions to answer this question, and there is some math involved. First, we are talking about “average” paddlers in a wide, stable, plastic kayak.  The average recreational kayakers can travel about three miles per hour (2.6 knots) when paddling.

Most casual paddlers out for a leisurely day on the water will take breaks along the way. It’s hard to maintain a constant stroke for long periods until you have built up some stamina.

As you gain stamina, strength and upgrade to a faster boat, a paddler can hit four miles per hour (3.5 knots) or more. But, the vast majority of folks are going to hit about 3 MPH while they are paddling.

Now for the math behind the madness.  Please note that I don’t care much for math, but here goes. Kayaks have a theoretical maximum speed called the hull speed (or displacement speed) of about 1.34 times the square root of the waterline length in feet. As an example, using this formula for a 12-foot kayak, the kayak speed is about 4.6 knots or a little over 5 MPH.

How long does it take to kayak one mile?

There are a lot of factors that will be put to the test when you kayak one mile.  Generally speaking, the average person can kayak one mile in about 30 minutes, give or take. This assumption is based on calm conditions and the “average” paddlers’ abilities. We will discuss factors that can affect kayak speed next.

There are a lot of factors that can impact kayak speed. Many of these are discussed below. If we missed something, be sure to let us know.

Every paddler is unique.  Things like stamina, experience, and stroke rate play a role in kayak speed.  A beginner will most likely be less efficient and move slower than a seasoned paddler. Efficient strokes help you paddle longer with less effort.

Someone who is physically fit, with a strong upper body and core, can maintain a high stroke rate for an extended period, which is advantageous when you are paddling a mile. Your ability as a paddler has a significant impact on kayak speed.

The body of water has an impact on kayak speed.  Paddling across a flat, calm lake is easier than paddling against a current or rough open water.

On the opposite end, if you are paddling with the current, you will move much faster than your average speed.  This is true for tides and moving waterways like rivers. It’s essential to be aware of the currents wherever you are paddling and choose an appropriate spot for your skill level.

There are many types of kayaks available these days, including recreational kayaks, touring kayaks, fishing kayaks, inflatable kayaks, to name a few. You also have sit-inside and sit-on-top kayaks.

Overall, sit-inside kayaks have a tendency to be faster than sit-on-top kayaks because the center of gravity is lower, and there is less wind resistance.

Kayaks are made of different materials, like hard plastic (polyethylene), carbon fiber, and wood. The more rigid the material, the less the boat will drag in the water, the faster it will be. Kayaks made from fiberglass, or carbon fiber, are faster than a recreational kayak made of polyethylene.

Many recreational kayaks are made of polyethylene. These boats are popular with beginners because they are durable and stable. If you are looking for a faster vessel, look for a kayak made from lightweight yet rigid materials like carbon or Kevlar.

Another factor that plays a role in kayak speed is the length and width of the kayak.  All else being equal, a longer kayak goes faster than a shorter one.  Sea kayaks are longer and narrower than a standard sit-in or sit-on-top recreational kayak and cut through the water much easier but are not as stable.

Popular recreational kayaks (sit inside or sit-on-top) are shorter and wider than a sea kayak, which is better for stability and turning.  In general, a longer, narrower kayak will paddle faster than a short wide kayak.

Not only does the weight of the kayak itself play a role in how fast it can go, but any gear you take with you will compromise speed too. If you are out for a leisurely paddle with a cooler, your dog, and other gear, you aren’t going to break any world kayak speed records.

It’s going to take you longer to paddle a mile with a loaded kayak. You have to consider the weight of the vessel, the paddler, and any gear on board.

Water conditions can have a tremendous impact on kayak speed.  Currents, waves, tides, or choppy water will impact, either positive or negative, depending on the situation, traveling against or with the flow of water.

It’s difficult to precisely say how long it will take to kayak a mile since there are many factors.  Each paddler’s unique ability, the type of kayak they are paddling, weather, and water conditions all play a role in how fast a kayak can go.

Typically, given calm conditions and an average recreational kayak, it will take a person about 30 minutes to paddle one mile.  If you are in a hurry to get back to your launch point before dark, you might be able to paddle faster with that added motivation.

What is your personal experience with kayak speed?  Let us know below.