Skip to content
This post may contain affiliate links, meaning we receive commissions for purchases made through those links, at no cost to you. Please read our disclosure for more info here. 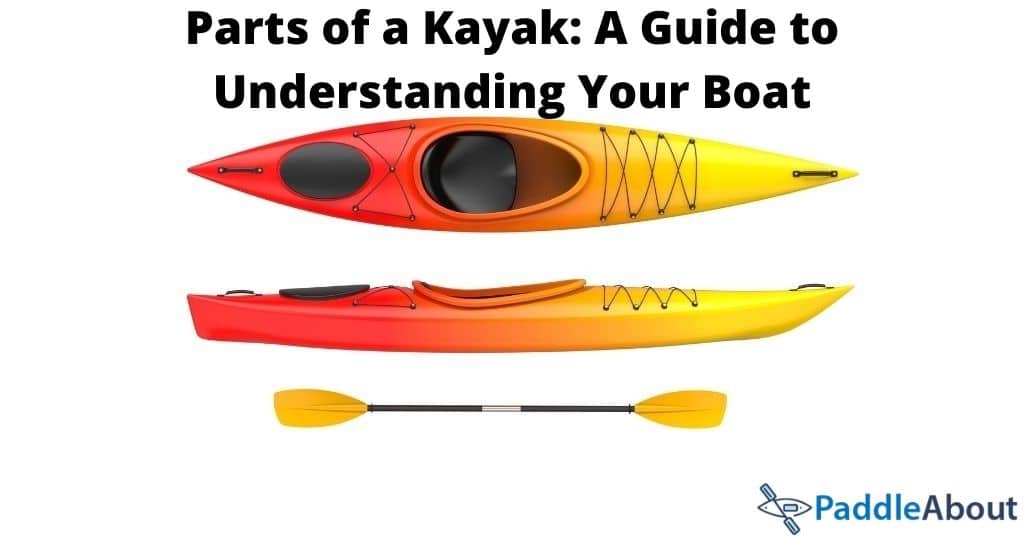 Whether you are a novice or a seasoned kayaker, it is good to understand the parts of a kayak. Familiarizing yourself with different kayak parts can help your overall experience on your watercraft and contribute to greater enjoyment of this recreational activity.

Furthermore, you will be able to feel more comfortable discussing these parts with other kayakers — and be better adjusted to the world of boating in general. This article will explore the parts of a kayak and detail its features, functions, and applications.

A kayak is a type of boat, and like any boat, it can be referenced through the language of boating. Specific positional and directional terms apply to all boats, and kayaks are no exception. These terms include the following:

The bow is the outside front end of a boat, in this case, a kayak. Its pronunciation rhymes with “cow.”

The stern is the outside rear end of a kayak. It is directly opposite of the bow.

The port is the left side of the kayak when you are facing forward. You can remember this by remembering that “port” and “left” both have four letters.

The starboard is the right side of the kayak when facing forward.

The aft is the inside (onboard) rear end of your craft, situated near the stern. The stern, in contrast, refers to the outside (offboard) rear end.

When your kayak is moving in the direction of the bow, you are moving “forward.”

When your kayak moves in the direction of the stern (backward), you are moving “astern.”

These terms can be combined — like “Port Bow” or “Starboard Bow” — to refer to the front-left or the front-right of the kayak, respectively. Just remember that “Port Quarter” and “Starboard Quarter” refer to the rear-left and rear-right directions.

Body of the Kayak

The terms for the body of the kayak also apply to boats in general. They include the following:

The hull refers to the bottom of the kayak — the portion of which is in contact with the water. It can be of the following different shapes:

The keel is the middle underside part of the hull. It can come to a sharp “V”-shaped point, or be rounded or flat.

The deck is the top of the kayak. It can be either smooth or molded.

The outfitting refers to parts of the kayak that can be tailored to the individual kayaker. They are usually somewhere on the kayak’s body and can be either permanent or adjustable.

Kayaks come in many different types, but they can roughly be divided into Sit-Inside and Sit-On-Top varieties. Sit-Inside kayaks are the traditional kayak type where the user’s legs fit inside the hull — and the kayaker is generally exposed from the waist up. These kayaks can be longer in shape (like a sea or touring kayaks) or shorter (like whitewater kayaks).

Sit-On-Top kayaks, seen here, are a more recent development in kayaking. The user in these types of kays sits in a chair or indented molding on the kayak deck. Unlike Sit-Inside kayaks, Sit-On-Top kayaks leave the user’s legs exposed. They are popular for fishing and more leisurely uses.

Both types of kayaks include features inherent to their design.

This is the area where you sit in a Sit-Inside kayak. Located in the hull and has enough room for the kayaker’s legs.

The flap or protective covering partially covers the cockpit, designed to keep water out (and off of the kayaker).

The rim that serves as the edge of the cockpit.

The walls in the hull that separate the cockpit from other (waterproof) compartments in the bow and the stern.

The openings in the deck that give the kayaker access to compartment spaces, both forward and aft. These spaces are formed by the bulkheads.

In longer kayaks, a hatch that sits very close to, and behind, the cockpit. It is a separate compartment meant for easy access while on the water.

A lowered area in the deck meant to hold a compass for piloting (navigation).

Pads that are in the cockpit fit on the seat sides. They are adjustable and can be removed; they are meant to keep the kayaker in a stable seated position.

A type of handle at the end of a kayak that is attached to an adjustable cord. It can be used to tow the kayak on dry land and be used if a kayaker is overboard and needs a place to hold onto the kayak.

The rudder is a thin and long piece of material that dips into the water off the stern. In kayaks, it can be controlled by foot pedals or braces. It is nominally used to steer the kayak, but in practice, is used to stabilize the craft in windy conditions.

The rudder uphaul is used to raise and lower the rudder. It is usually located near the cockpit.

A skeg is a fin-like piece of material located on the aft section of the keel, either slightly ahead of the stern or directly under it. It is either permanently fixed or can be raised to be flush with the hull.

A skeg slider is located by the cockpit; it is used to raise or lower the skeg deeper in the water.

A bulkhead feature is usually found on whitewater kayaks. Used as a footrest.

Are tightly-bound lines across the deck. They can include:

Are located over the legs in the cockpit, on the underside of the deck. They are used in various control and maneuvering aspects of the kayak, especially while paddling.

An adjustable seat that can raise or lower within the hull to position the kayaker over or under the waterline. It is commonly found in fishing kayaks.

Small holes in the hull that go clear through to the deck. They allow excess water to flow from deck areas down to the water below. They can let water in the other way, however, and some kayakers use plugs for this.

Handles at the bow or stern used to carry the kayak on land. These can also appear on Sit-Inside kayaks.

Molded areas of the deck that allow kayakers to place their feet in different places, depending on the height of the user.

A moving pedal feature on some Sit-On-Top Kayaks that allows kayakers to move the craft forward using their legs, instead of with a paddle.

A depression in the rear of the cockpit — towards the stern — that was originally used to house a scuba tank. In current practice, a tank well can be used to carry all different types of gear.

In fishing kayaks, a rod holder is a molded cup-shaped depression in the deck, used to carry fishing rods. It can be in several areas of the deck, but can often be found directly behind the cockpit.

Accessory rails are often found alongside the forward cockpit area. They are used to attach rod-holders, line mounts, depth-measuring mechanisms, fish finders, and other items to the deck.

Like the Sit-Inside kayak, a Sit-On-Top kayak can also have hatches in the deck. In some fishing kayaks, there are bait hatches that allow kayakers to carry bait and other equipment.

Hopefully, from this overview of kayak parts, you can better understand the features and uses of kayaks. Though Sit-On-Top and Sit-Inside kayaks can be very different from each other, they share common parts that can be easily identified.

If you are in the market for a kayak, you can check out some of my other articles here and here.

Let me know if you have any questions.

Steve is an avid kayaker and founder of Paddle About. When he is not on the water, Steve enjoys outdoor activities, including fishing, camping, and hiking with his family. Read more.