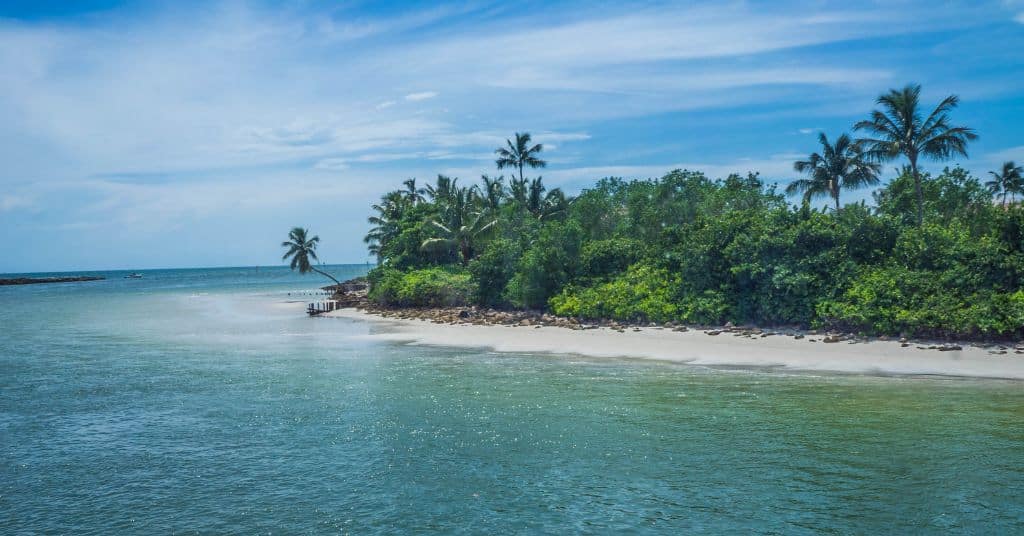 Florida is a popular vacation destination for local and international travelers, but which Florida coast is more humid? Humidity can make a beach vacation uncomfortable if you are not used to this climate. Choosing a Florida coast with lower humidity or choosing the right time of year for your vacation will improve your Florida coastal experience!

Which Florida Coast Is More Humid?

The west coast of Florida is slightly more humid than the east coast. The southeast, south, and southwest coast have the highest humidity, with Key West being the most humid city in the state. Humidity is the worst during summer, with more tolerable levels experienced in autumn, winter, and spring.

The majority of Florida is a peninsula that juts out into the ocean off the southeastern corner of the United States of America.

The peninsula shape of Florida places it in a unique position of having multiple coastal regions; an east coast, a south coast, and a west coast.

The differences between the two oceans affect the weather conditions on the coastal sides of the state, including the humidity. The lower latitudes of the south Florida coast give the region a distinctly tropical climate.

The following table describes the comfort level of each dew point temperature range.

These comparisons of dew point to comfort level will help you establish the differences between the humidity levels of the Florida coastline.

Is The East Coast Of Florida Humid?

The Florida east coast is influenced by the Gulf Stream, which is a body of warm seawater that flows from the Gulf of Mexico, around the Florida peninsula, and northwards along the east coast.

The warm temperatures of the Gulf Stream sea current along the coast influence the climate and the humidity along the eastern shoreline.

The humidity effect of the Gulf Stream lessens the further north it travels up the eastern Florida coast. This results in different humidity conditions between the upper and lower sections of the east coast.

Daytona beach is located on the northern section of the east coast and has a subtropical climate typical at these latitudes.

The summer dew point temperatures in Daytona Beach average at 69.8°F or 21°C, placing the average summer humidity on the borderline between humid and oppressively humid.

The maximum dew point temperature during summer reaches 73.4°F or 23°C during July and August, making these the most humid months of the year.

The winter humidity in Daytona beach is much more tolerable, with the average being a dew point temperature of 54.6°F or 12.6°, which is firmly within the comfortable humidity range.

West Palm Beach is located slightly south of the middle of the Florida east coast and is a popular vacation destination in the state. The average summer dew point temperature in West Palm Beach is 71.6°F or 22°C, placing the average in the bottom range of oppressive humidity levels.

The winter dew point average in West Palm Beach is a comfortable 57.7°F or 14.3°C, but still a higher humidity than Daytona Beach further up the east coast.

Miami is located on the southern part of the east coast of Florida and experiences an average summer dew point of 71.6°F or 22°C, which places the humidity in the oppressive category, like West Palm Beach.

The average winter dew point humidity in Miami, Florida, is 61.8°F or 16.6°C, which is in the slightly humid range.

Is The West Coast Of Florida Humid?

The west coast of Florida has the warm Gulf of Mexico to thank for its local weather conditions, and the warm water from this region contributes to the Gulf Stream, which also affects the east coast.

Key West is located off the southwest coast of Florida and is the most humid city in the USA. The summer season dew point temperature averages at 74°F or 23.3°, close to the very uncomfortable humidity rating.

What makes the humidity unpleasant in Key West is that it is humid for a long period of the summer season. The average winter humidity is 66°F or 19°C, which falls in the humid range of the scale, meaning there is no escape from the humidity, even in the winter season.

Fort Myers on the west coast of Florida has a summer dew point temperature average of 71.6°F or 22°C. Fort Myers is on a similar latitude to West Palm Beach on the east coast, and while the humidity average is the same for both cities, Fort Myers has higher humidity for more of the summer months than West Palm Beach.

The winter dew point average in For Myers is 59°F or 15°C, which borders on the comfortable and slightly humid part of the scale, and is higher than the winter humidity of West Palm Beach.

However, the higher humidity makes the west coast less attractive than the east coast. Therefore, the best time of year to vacation on the Florida west coast would be in the cooler months of November through April.

The east coast is the most popular vacation destination in Florida due to the lower humidity, larger cities, and the added attraction of better surfing conditions.